Former Washington Capitals and current Vancouver Canucks head coach Bruce Boudreau had some thoughts about his ranking on the NHL’s most handsome coaches list on Tuesday.

Boudreau ranked 16th on Gambling.com’s “Most Handsome NHL Coaches” list. And on Tuesday, he had quite a laugh about it with the Canucks media.

“There must have been an awful lot of blind people,” he joked via Harman Dayal.

The site ran all 32 coaches officially NHL portraits through the Golden Ratio Face App, which measures physical perfection according to the ancient Greeks. The Golden Ratio is out of 10, and for the coach rankings, decimals were rounded up and down to ensure consistency in digits. The real “Golden Ratio” is 1.618, though this app ranks out of 10.

Boudreau scored at a 8.06. Jay Woodcroft, the Edmonton Oilers bench boss, leads the pack with a 9.18. Meanwhile, Capitals head coach Peter Laviolette finished 32nd with a score of 6.04. 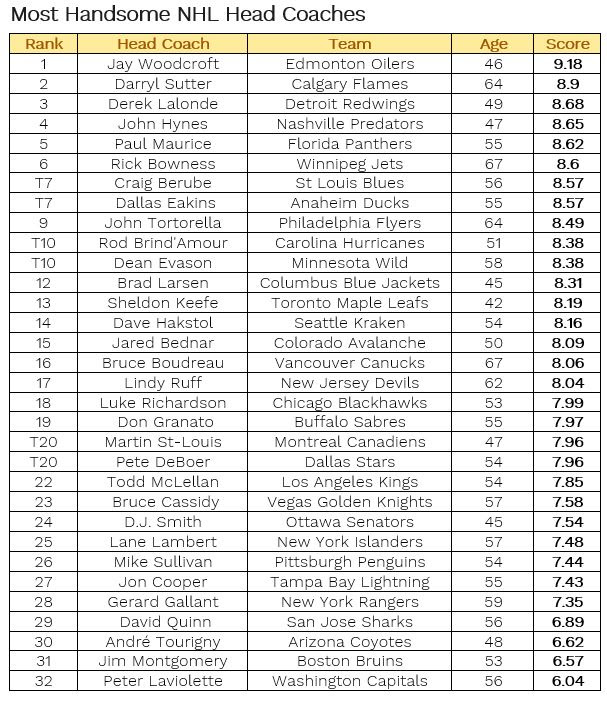 Welcome to your new home for Washington Capitals breaking news, analysis and opinion. Like us on Facebook, follow us on Twitter, and don't forget to subscribe to WHN+ for all of our members-only content from Sammi Silber and the National Hockey Now network.
Related Topics:boudreauBruce BoudreauCapitalsfeaturedjay woodcroftPeter LavioletteVancouver Canuckswashington capitals
Up Next

Kuemper Switches To Konekts, Both Capitals Goalies In Laceless Skates

Get WHN in Your Inbox

What’s Going On With Mantha & What’s The Fix For Capitals?

As Vanecek, Samsonov Thrive, Should Capitals Be Asking ‘What If?’

Ovechkin Experiments With Different Sticks As He Chases Gretzky

All the Capitals news that's fit to print

Sign up and get all of our stories sent directly to your inbox.

Thank you for subscribing.

We respect your privacy and take protecting it seriously

All the Capitals news that's fit to print

Sign up and get all of our stories sent directly to your inbox.

Thank you for subscribing.

We respect your privacy and take protecting it seriously